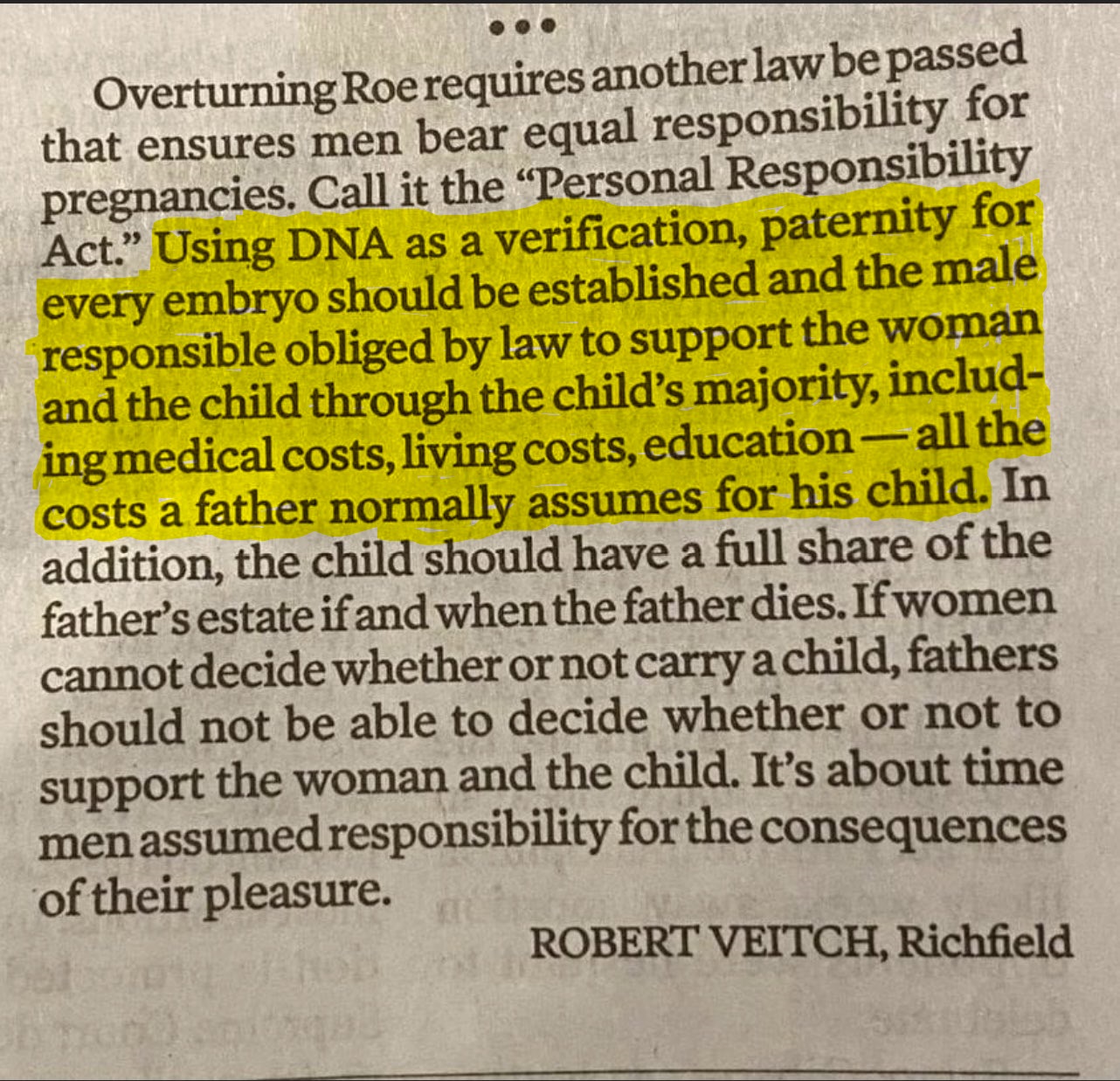 The above is a letter to the editor of the Minneapolis Star Tribune, written on May 3, 2022 by Robert Veitch of Richfield, MN. On June 25, 2022, Lynnette Capozio of Fairmont, WV put the letter into an online petition called the "Equal Responsibility for Pregnancies Act." The petition for the ERFP Act is linked here: Petition for the ERFP Act. The ERFP petition gained about 1000 signatures in its first month.

The ERFP Act has 3 of the 5 features of the Right to Choose Life Act, thereby making it an unfinished version of the RTCL Act. The features of each bipartisan bill are indicated in the table below. The petition for the RTCL Act is linked here: Petition for the RTCL Act. Please contact us if you notice anything that might be lacking in the RTCL Act, or anything that might be erroneous. The RTCL petition has gained very few signatures, because it will not be promoted until the elders/bishop of a church allow it to be promoted in their church as a mediation settlement agreement between the two sides of the divided church. Unless the Lord builds the RTCL movement, we labor in vain trying to build it (Psa. 127:1, Acts 5:38).

How does debt verification work?
Until recently, it was not possible to verify the paternity of an implanted embryo. But advancements in DNA paternity testing led to the development of the non-invasive prenatal paternity test in the 2010's. Here is how the NIPP test works. The pregnant woman submits a blood sample, and the alleged father of her unborn offspring submits a DNA sample. Then, his DNA is matched with her offspring's DNA in the blood sample. The test costs about $900, but it's only necessary when the man contests the pregnant woman's claim of paternity. If she submits a false claim under the RTCL Act, then she would pay for the test; and if he contests a true claim, then he would pay for the test. That way, the cost of the test would deter her from submitting a false claim and him from contesting a true claim.

What is the debt loophole and why should the bill close it?
The child support loophole is a means of escaping a child support obligation. At this time, that means of escape is provided by abortion. At this time, any new child support debtor can get his debt remitted by making the mother of his unborn creditor get an abortion. But under the RTCL Act, he would have to pay his child support debt even if someone were to kill the unborn creditor. This takes away the motive for him to force her to get an abortion or to kill both her and his unborn creditor in a double homicide. By taking away the motive for either crime, the RTCL Act would prevent either crime from taking place.